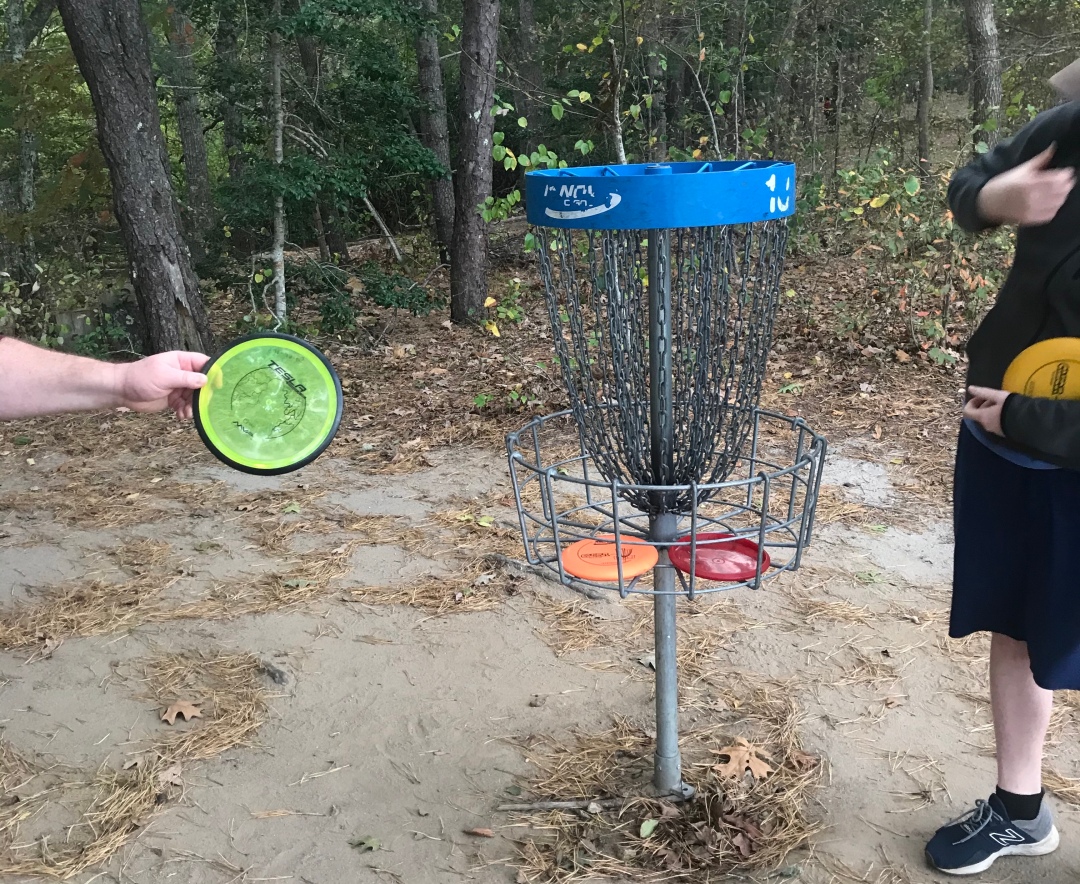 The Fall is a great time to be out and about in nature. Being active and outside
has so many different benefits for both your mind and body. Since the quarantine
began, I have been going with my family to play Disc Golf at Burgess Park in Marstons
Mills. The park belongs to the town of Barnstable and is a full 18-”hole” course. It is
well maintained and free for everyone.

The game of Disc Golf involves trying to land a disc into a special metal basket;
which serves as the hole, in as few throws as possible. Most holes are relatively long
and in the woods, so it also serves as a hike, just with frisbees. There are many
different types of discs, such as drivers, mid-range and putters; as well as many
different styles, designs, and materials used to make them. I mostly just use one disc
the whole time and try to throw the thing as far as I can; but the rest of my family is
more serious about it than me.

My little brother, Jared is very into disc golf. He is a member of the PDGA, the
Pro Disc Golf Association. He receives their magazine in the mail. We even have our
own basket in the yard that he plays in between Zoom classes. He is also a great
regular golfer for Sturgis West. Our dad, Bruce, is a big fan of disc golf as well, and he
and Jared can get very focused at times. It is great to be out with them and to get
some exercise and fresh air, and just to get out of the house for a bit; doing a safe
and socially distanced activity.

We played a round last Wednesday, on a sunny and warm fall evening. There
are usually a few other people out and about at the course, but because the holes are
long and the course is spread out, it remains a safe activity. The park also has a
practice basket and a large field, where people can just come and throw around for a
bit, without having to actually play the course.
Before we set out on the course, I spoke briefly with Leo Marsh from Hyannis.
“It’s great to come here after work and just chill for awhile.”, said Marsh.
“Sometimes I meet friends here and we hang out; it’s just a great place to be and it’s
pretty close to everything.”

Burgess Park is located just off of Route 28 in Marstons Mills, on the shore of
Hamblin’s Pond. The Marstons Mills Cash Market, just down the road, sells discs and
other items for disc golf, and pretty much any sporting goods store such as Dick’s in
the mall would have them as well. There are also other disc golf courses nearby, both
on and off the Cape. There’s a new course being built at Oakcrest Cove in Sandwich,
and there are also courses on Martha’s Vineyard and Nantucket. I’ve played the
course on Nantucket with my family and it was a great experience. Also nearby are
courses at UMASS Dartmouth and at Sunnymede in Middleborough.

After playing a few holes, I also spoke with Dave Clarkson, who was
volunteering and doing some course maintenance, removing some large brush and
raking some leaves. “ I just had some spare time and wanted to clean up a bit.” said
Clarkson. “The Cape Cod Disc Golf Club has certain days where they do bigger
projects like installing benches, cleaning up trash, and repairing tee boxes.” He went
on to say that, ”They have certain workday events every so often on the weekends,
but I like to come by and do my own thing from time to time, just to be in nature.”

Listen in to Alexandria Zine’s Interview with President Cox

Any Photo(s) you want!